Monmouthshire Cottages owners had a wonderful day on 13 February 2020 when they were announced as winners of the Regional heats of the Wales Tourism Awards. They have been awarded the title of  Best Self catering in South East Wales  with their three five star self catering cottages ( located in Tintern, Catbrook and Usk) and will now represent the region in the National Finals in May where they will come up against the best from West, Mid and North Wales.

Mr and Mrs Wilton say they are utterly amazed and delighted with this honour- they have won the National award an incredible twice before- and never expected to get this far against such hot regional competition again- but as they say, you never know!

The image shows the presentation of their certificate by Lord Elis -Thomas Deputy Minister for Tourism in Wales. 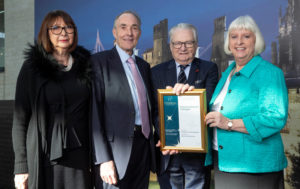